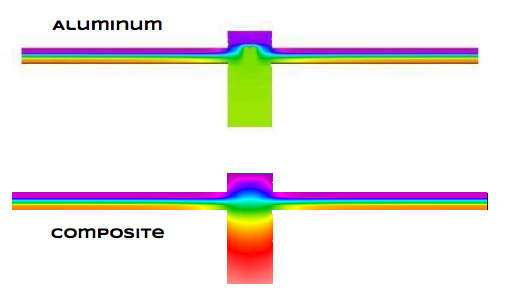 We’re often asked the question, why don’t we make a fibreglass curtain wall frame for double-glazed systems ? It’s a much bigger part of the market than triple-glazed, isn’t it ?

While this is true, there’s a very good reason why GlasCurtain doesn’t compete in that market, sizeable though it may be. It’s simple : when it comes to double-glazed systems, the glazing is the weakest part of the thermal envelope, not the frame !

As we see with the thermal images above, in triple-glazed systems, GlasCurtain’s fibreglass frame makes an enormous difference. In fact, we put both fibreglass and aluminum frames to the test and found that our fibreglass frame is a 200% better insulator, minimizing thermal bridging, improving occupant comfort, and reducing stress on HVAC systems.