Since the late summer of 2014, the exterior envelope of The Mosaic Centre in Edmonton has been under construction. Today, we’re pleased to announce that this part of Alberta’s first net-zero commercial building is complete! The building is closed in!

Since everyone loves a little time-lapse architectural photography, and since GlasCurtain is really quite proud to be a part of such an incredible project as our first commercial application, let’s walk through the construction of this ambitious new building together.

Starting with an undeveloped plot on Parsons Road in south Edmonton, Manasc Isaac Architects worked with The Mosaic Family of Companies client team to make their ideas to paper. After an extensive consultation, and the commencement of a conversation that continues to this day, the Parsons Road site was cleared, the foundation was poured, and the frame for The Mosaic Centre was raised. (Yes, that’s glossing over things a bit, and not to overlook the efforts of Chandos Construction and their sub-contractors, but we want to leave room in this story for the curtain wall installation!)

GlasCurtain fibreglass composite curtain wall framing was used extensively on this project, far more than you’d expect for such a high-efficiency building. Most high-efficiency buildings minimize the amount of glazing they use because this is the weakest part of the entire thermal envelope. That is, the typical glass and aluminum frame combination that makes up normal curtain wall is the best conductor and the worst insulator in the entire envelope.  For proof, look no further than a typical Passivhaus design; it’s like being in a bomb shelter.

Moving along to the photos, in early July 2014, the east end of The Mosaic Centre looked like the picture you see below, from which it’s clear to see that the building was already well on its way to taking its final form. 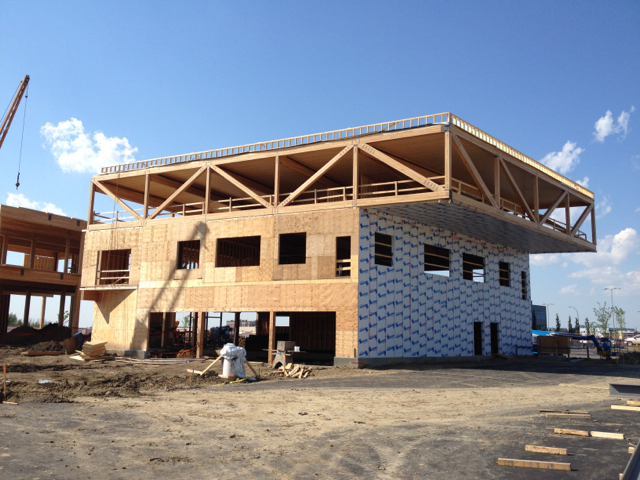 By late July 2014, as seen in the pair of photos below, the GlasCurtain curtain wall framing on the third story of the east end was almost completely installed. The supporting steel frames are the long, grey horizontal lines spanning corner-to-corner on the upper floor, while the GlasCurtain fibreglass frames are more visible in their vertical aspect. Note that the shorter horizontal spans in between the vertical spans are there to segregate the smaller operable windows, supplied by Cascadia Windows, from the curtain wall glazing. 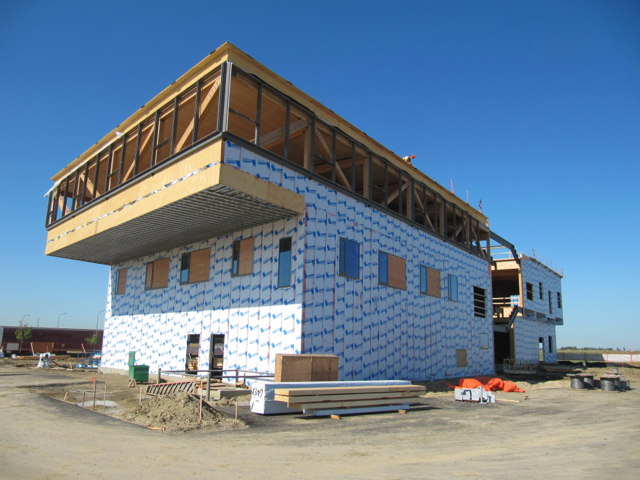 From the interior, as you’ll see in the two photos below, the left one taken in late July 2014 and the right one just one month later, that from this vantage point, we not only have a view of the south Edmonton neighbourhood of Summerside (when the framing isn’t covered with weatherproof tarping), but we can also appreciate just how open, warm, and really very lovely this future co-working space will be! These interior perspectives were taken on the east side of the third floor, where the overhang is in the above photos. 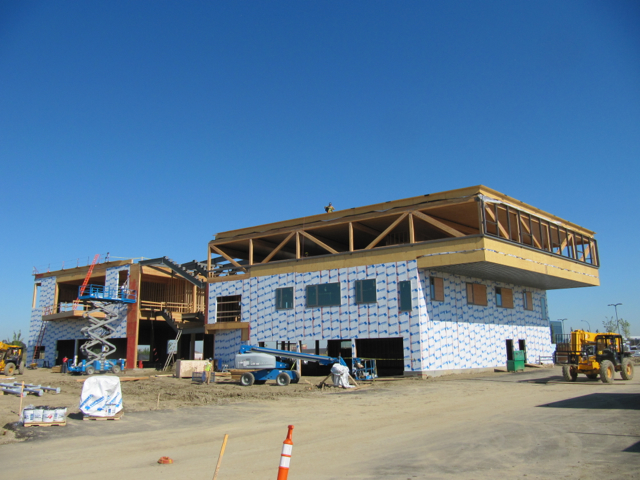 And the light! Oh, the light! Compared to pretty much every other net-zero commercial building you’re likely to come across, because of the low-U-value triple-glazings from PPG and our fiberglass framing, The Mosaic Centre offers its occupants so much light. Add in the operable windows for a bit of natural ventilation and you have a pretty unbeatable working environment! To say nothing of the daycare, yoga studio, and restaurant that will occupy the main floor of the building… 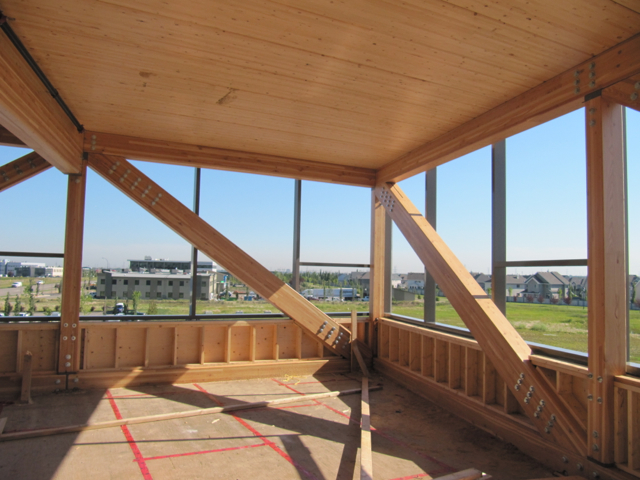 By mid-September, as we can see below, the curtain wall framing on the north side of three-story central atrium had just been installed. These unmissable, stunning, and 8.4m continuous vertical curtain wall lengths are a sight to behold. (A typical aluminum vertical would be no more than 6.0m due to the required anodizing process. Since fiberglass is inherently corrosion-resistant and every bit as strong, we can have longer verticals without stacking or tower joints!).

And check out the trendy glulam staircase! The atrium connecting the two halves of The Mosaic Centre has a whole raft of them!

By mid-October, as we see in the the exterior shot below taken from the southwest corner of The Mosaic Centre during a simply beautiful Alberta sunset, the south side of the central atrium curtain wall is a more intricate tiered design that serves as an aesthetic foil to the uniform curtain wall on the north side of the building. That atrium is really quite the showpiece! 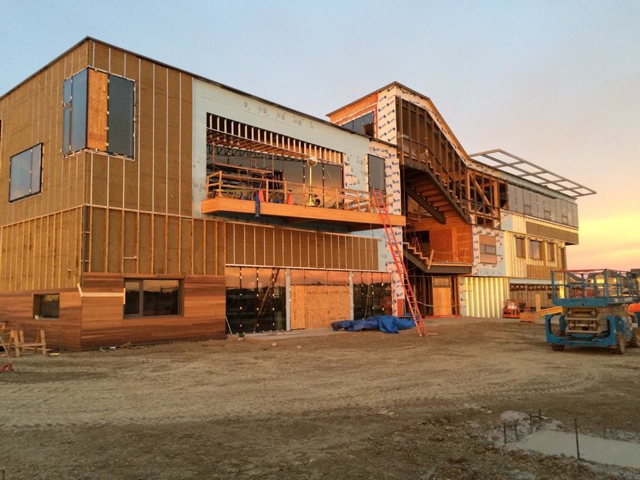 As of January 2015, as you can see below, all the glazing, windows, and curtain wall frames have been installed. Yes! We’re all closed in!

From the southeast vantage point seen below, we can also see that the distinctive wood paneling is bringing the exterior to life and that the solar panels are starting to fill the roof. This sustainable stunner is like nothing else in Edmonton and we couldn’t be more proud of our involvement. 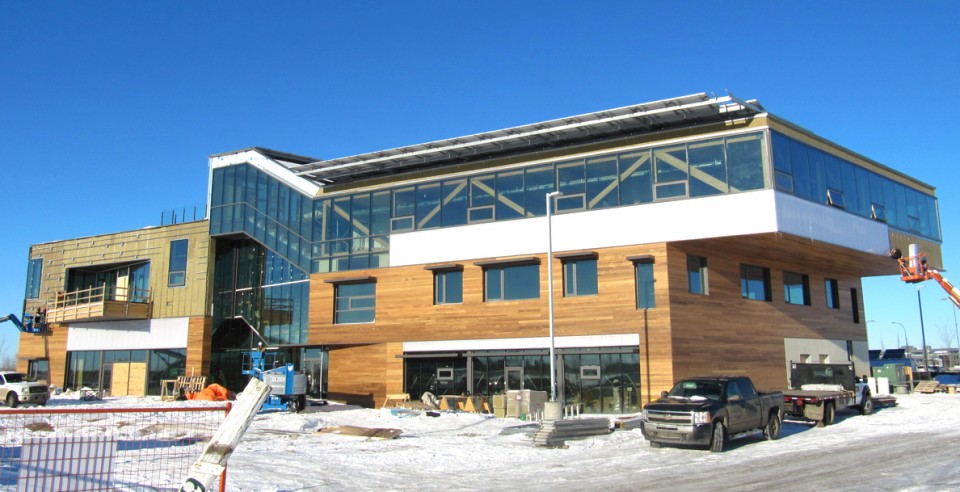 So The Mosaic Centre in Edmonton is really coming together and GlasCurtain’s contribution to the envelope is all wrapped up!

The Mosaic Family of Companies and their tenants are now just a few short months away from occupancy and GlasCurtain’s first commercial application is in the ground. Can you believe it happened so fast?

It’s also hard to believe that it’s barely been a year since GlasCurtain launched at Greenbuild 2013 in Philadelphia and less than a year since we won the Canada Innovation Award. What progress!

With The Mosaic Centre, it was an an absolute pleasure to work and learn with all of our design and construction partners. To everyone at Manasc Isaac Architects, Chandos Construction, Ferguson Glass, and to the entire Mosaic team: Thank You!

That’s all for this project. On to the next one!